Captain Chris Howard reports on his challenge to run 5 marathons in 5 days at the Royal Military Academy Sandhurst to raise money for Help for Heroes.

Captain Chris Howard has now completed his challenge of running 5 marathons in 5 days in the grounds of The Royal Military Academy Sandhurst between the dates of Monday 25th June to Friday 29th June. In his blog, he thanks PhysioPod for their financial and physical support.

I am now 45 years old and have spent all of my adult life serving in the British Army as a Physical Training Instructor and Combat Soldier.

On my return from Afghanistan I decided to represent injured soldiers by running various events for Help for Heroes. 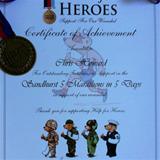 This year I decided to take on my biggest challenge yet, five marathons in five days.  As if this wasn't hard enough, I also decided to run each marathon round a 1 mile repetitive loop.  Yes, 26 loops a day for five days.

When I announced this to the rest of thre World I was pleased to be contacted by Physiopod, who not only sponsored me financially but also offered me one of their portable Physiopod products.  I have used the Physiopod throughout my training, the challenge and my recovery phases.  During the challenge itself I had access to a Physiotherapist who massaged me and gave me traditional recovery activities, such as ice baths, massage and flexibility exercises.  In addition we also extensively utilised the Physiopod. I found this to be a more relaxing and comfortable way of maintaining and recovering from a highly intensive endurance challenge.  In particular, I found the ability to use physiopod through the physiotherapist's hands very useful.  This gave the Physiotherapist the ability to massage and utilise electrotherapy at the same time.

Needless to say, it is impossible to do a high-intensive endurance event without obtaining some very sore joints.  Therefore, the utilisation of Physiopod during my recovery phase has been excellent.  After only half a week I am already conducting low impact cardiovascular fitness activities.

I have done many of these ultra-endurance events previously for Help for Heroes and have, not surprisingly, suffered from the effects before, during and afterwards.  This time, however, I feel that Physiopod has minimised the pain and damage on my body and significantly and enhanced my recovery dramatically.

The Royal Military Academy Sandhurst, centre for coaching excellence. The RMAS Coaching Advisory Team was formed on the 25 July 2011, its function is to collaboratively develop and maintain the highest standards of coaching within the Academy.

Previous Military Fundraising Events that Captain Chris Howard has organised and participated in.

Thank you in advance.