"Having endured several months of severe back pain, it was with some scepticism that I opted to try the “non-invasive” Deep Oscillation therapy at Jayne Burbidge Therapies. Within a few weeks of receiving my first treatment, I was amazed to find that the chronic back that I had suffered for many months started to ease. Within a very short period my flexibility and movement improved dramatically and I have seen consistent improvement week by week"

Client described pain in his mid thoracic area T5/6 between spine and scapula with a pain level of 8. Client had experienced this pain since August 2018, he had no previous history of back pain. He described the pain as 'nagging' and was taking Paracetamol, Ibuprofen and Voltarol Gel topically. The pain would wake him during the night and getting out of bed in the morning was difficult. His overall mobility was restricted. He could not perform his usual daily golfing stretches because of the pain. The pain also prevented him from playing golf.

Though he had not received a formal diagnosis, the client thought that twisting during golf may have caused the initial problem; coupled with all the hours he spent on the road driving with a tendency to sit back from the steering wheel, with arms straight.

Client has previously received acupuncture and chiropractic treatment with no positive outcome. A full medical history was taken and the contraindications run through with client before treatment commenced.

N.B. Client has excessive back hair, so advice was sought from Julie at PhysioPod UK on the application of Deep Oscillation. Julie recommended to initially place a large piece of cling film over the area before treatment, so that the electrostatic impulses would be felt whilst massaging. 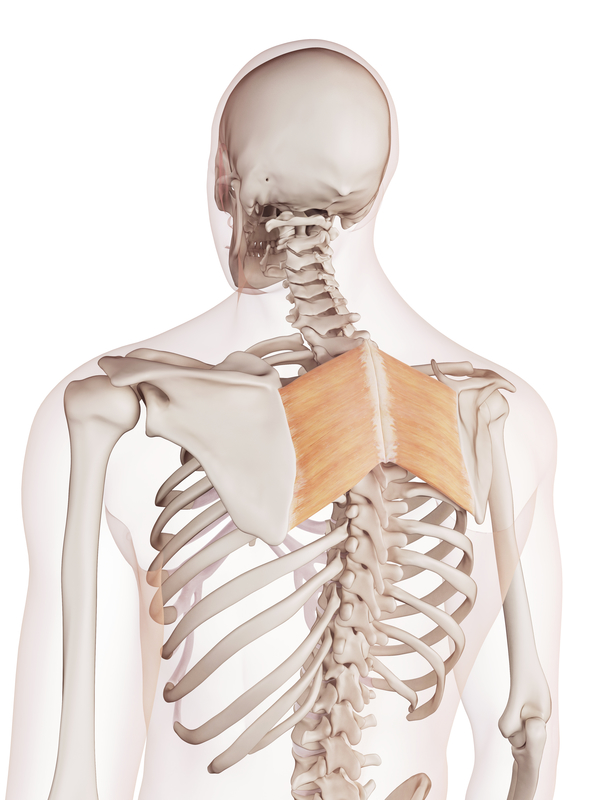 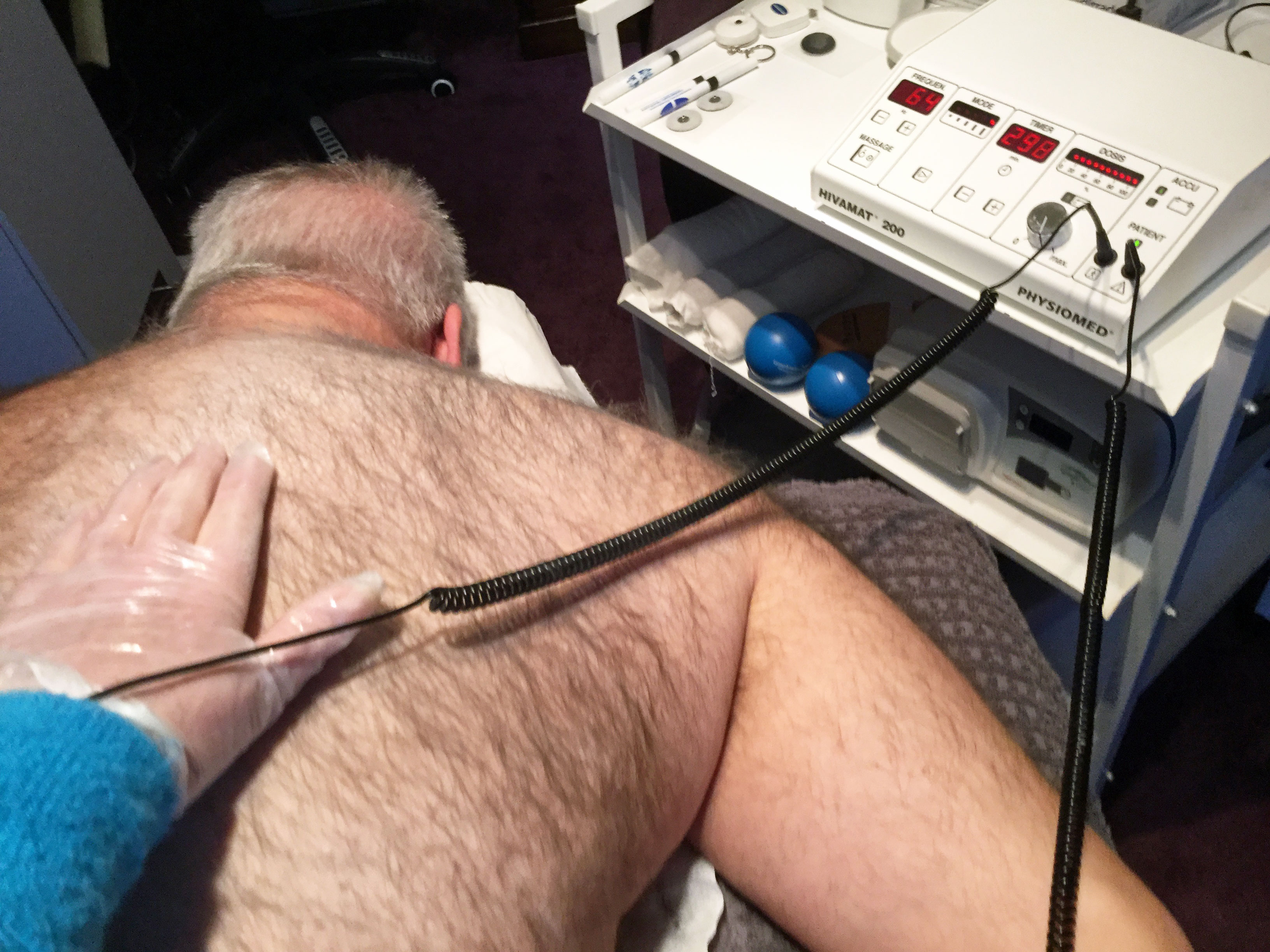 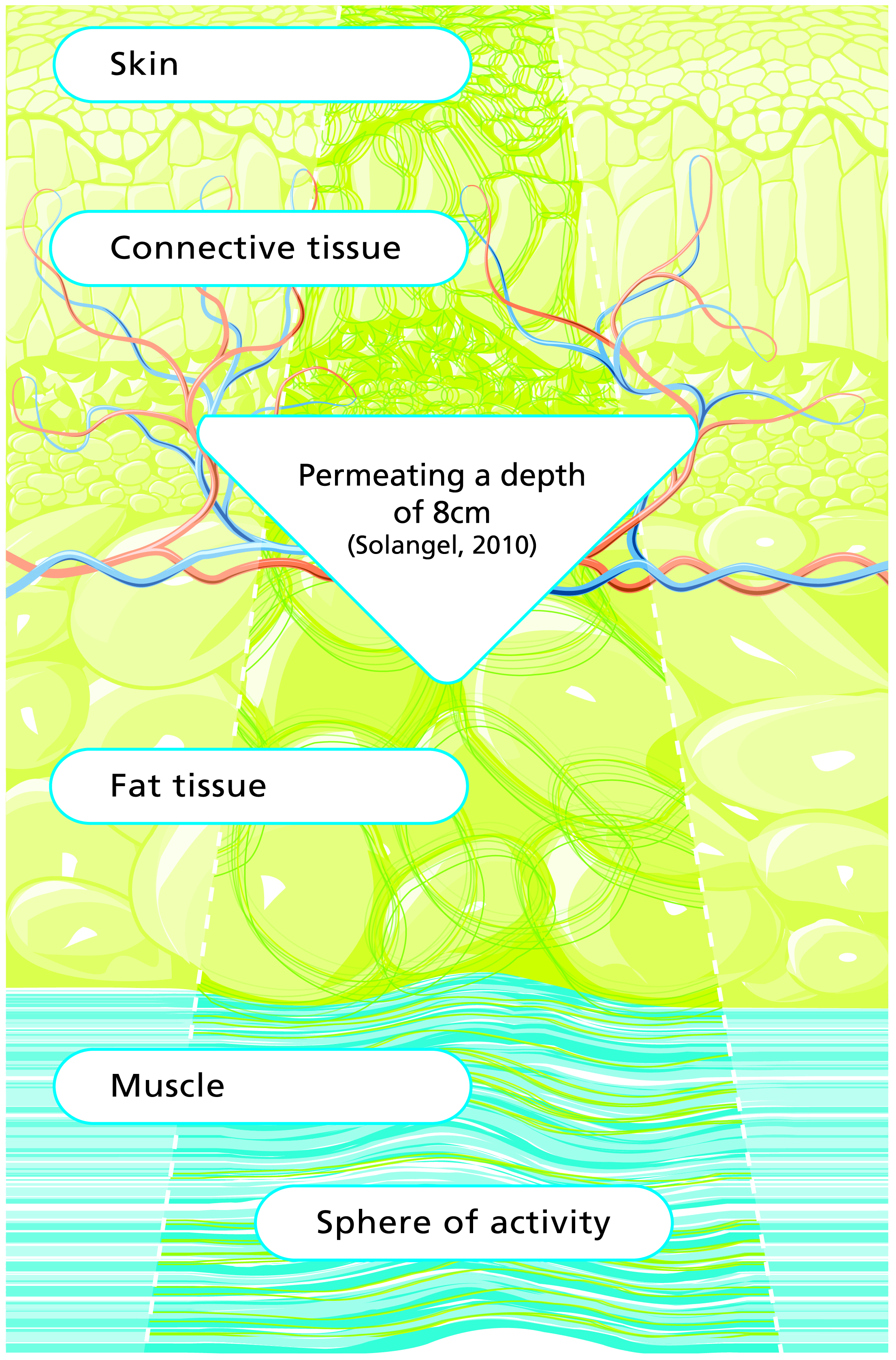 Deep Oscillation is gentle electrostatic field therapy which permeates an 8cm depth with clinically proven effects, it is applied through vinyl gloves or applicators (which also enable self management) and with or without pressure, making it ideal in the acute stage post injury or surgery. It is also an effective therapy for chronic conditions or where there is stubborn scar tissue or fibrosis.  Its effects on pain were presented by

Aim:               Boost microcirculation in the interstitial spaces of the connective tissue to cause a relaxation of the tissues. Enhance lymphatic drainage with excess biological waste products moving out to the lymph system for removal, enabling a return of blood, oxygen and nutrients to the area to increase healing rate and reduce pain.

Therapist started working in circular movements at the point of pain mid-thoracic area on the right hand side T5/6 area of Rhomboids. Gradually moving up and down the thoracic curve between the spine and scapula followed by effleurage movements from mid spine across the top of the scapula and clavicle and down the deltoid, draining towards the axillary nodes. Eventually working the whole of the right side of the back. Repeating from working from point of pain as described. For the last 5 mins of treatment the lower back was worked in circular movements either side of the spine in small circular movements working up the spine towards the top of spine repeating from small circular movements to larger movements incorporating the whole of the back and shoulders. Cling film was initially placed over the area and impulses were found. During the treatment clingfilm was removed and impulses were found, so clingfilm discarded altogether and treatment completed.