Twenty-three year old Joshua Peck was at very low ebb when a chance meeting with PhysioPod Director, Mary Fickling changed the course and speed of his now chronic injury rehabilitation.

"Whilst playing rugby for Paviors R.F.C 1st team on 24th October, 2015 (half way through the season) a collision left me with a damaged knee which was confirmed by x-ray at the Queens Medical Centre in Nottingham as an 'inverted dislocated knee' - I was sent home with crutches and a knee brace and a Physiotherapy appointment in four weeks time. After wearing the brace for more than two and a half weeks, as instructed by the QMC, I took it upon myself to pay for private physiotherapy such was my desire to get back in the game. 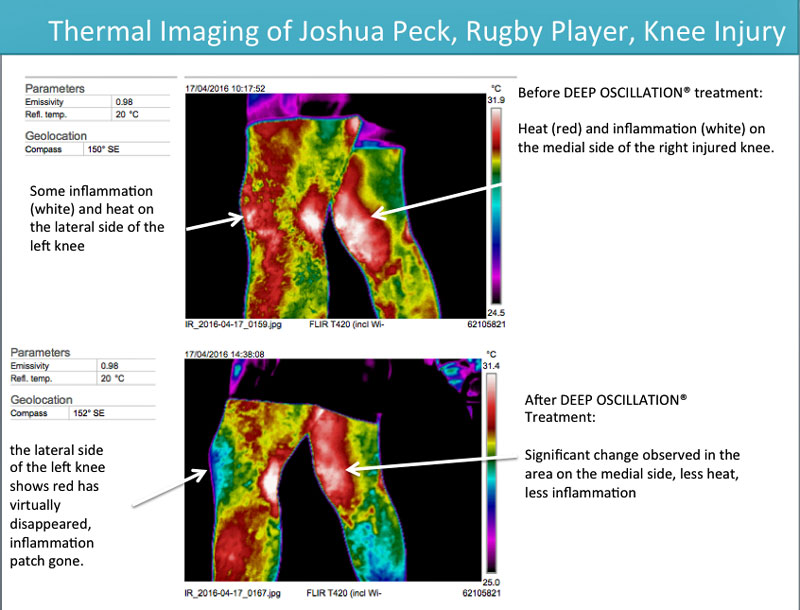 On commencement of sessions with the private Physiotherapist I was also diagnosed as having hypermobility in all of my joints. My knee started to get a little better but the swelling around my knee still wasn’t going anywhere.  The Physiotherapist stated it was my hip and my I T Band that were causing the issue.

At the appointment with the QMC Physiotherapist then said it was my glutes and my feet that were the issue and sent me away with a list of exercises.

So 5 months 24 days from injury and four months worth of physio, the swelling around my knee and the lack of movement had not improved - until a chance meet up with Mary Fickling, a friend of my fathers in our local pub on Saturday 16th April. After explaining about my injury and how it was seriously effecting my quality of life (I couldn't sleep, I was in constant pain and not being able to play rugby was making me miserable) Mary asked if I wanted to go along to the PhysioFirst Conference 2016 which PhysioPod™ UK Ltd were exhibiting DEEP OSCILLATION® at the EMCC that weekend.  Mary wanted to see what the therapy could do to help my knee, in particular for pain and swelling reduction and to try and help with range of movement. When I arrived, the conference organisers, who had kindly agreed my admission, directed me to the PhysioPod stand. Initial measurements of the swelling around the knee recorded 17.5 inches and Julie and Mark Dunwell, (Remedial Sports Massage Therapist and Athletics Coach exhibiting there too), both examined me and Dawn Rothwell another exhibitor and Remedial Sports Massage Therapist used a Thermal Imaging Camera to take pictures of both knees.  Interestingly, both of these also have DEEP OSCILLATION® in their practices, something I knew nothing about before - Dawn also uses it on horses.

The DEEP OSCILLATION® massage commenced, it was very gentle, no pressure at all, Julie did one leg and Mary did the other (the imaging showed my good leg was also showing signs of developing a potential problem too) probably because I had been putting more weight on it to take the brunt of the pressure off of the bad knee.  After 45 minutes of therapy, the pain decreased dramatically and there was more movement with the swelling visually reduced. I spent the entire day there and had multiple sessions with the machine, so after 4 months of physiotherapy where nothing had really changed with my knee, in just one day I had full range of movement recovered, as well as swelling reduced from my knee by one inch.  At the end of the day, we took another picture on the heat camera and it confirmed DEEP OSCILLATION® had broken down most of the damaged tissue around my knee and also it had helped my other knee too in preventing possible injury in the near future.

Mary and Julie let me take a DEEP OSCILLATION® Personal SPORTS home to self manage and I used it several times a day. The machine is very easy to use and it also has inbuilt instruction and graphics to show you the direction of massage. My knee is now back to its original size and I am back in the gym strengthening it back up again, which is a life saver, as I am a very active person and this was effecting my work and my social life too.

Thank you both Mary and Julie - you are my heros! 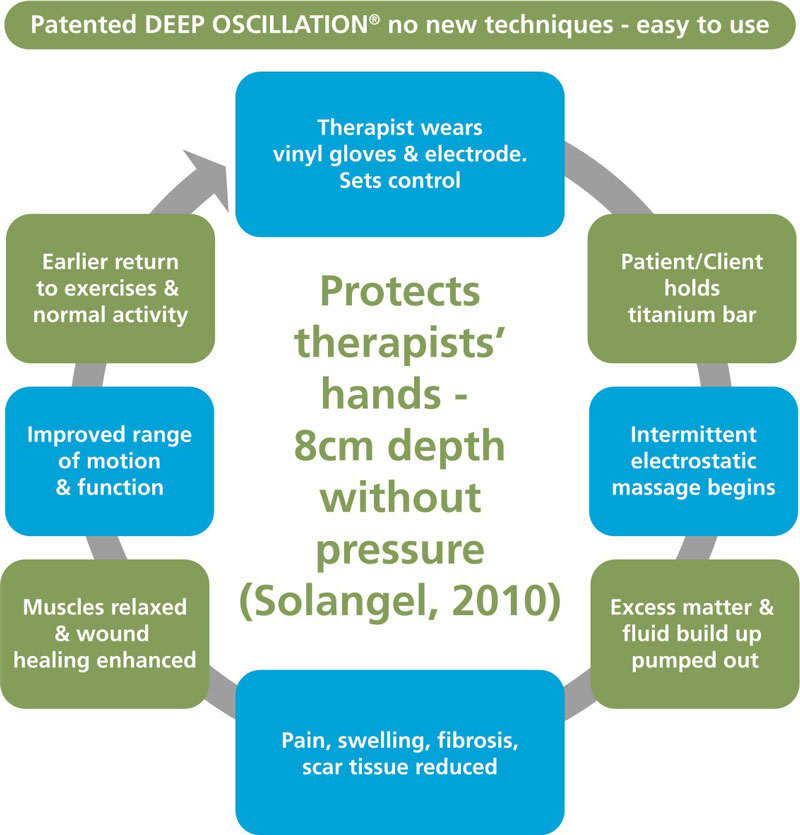 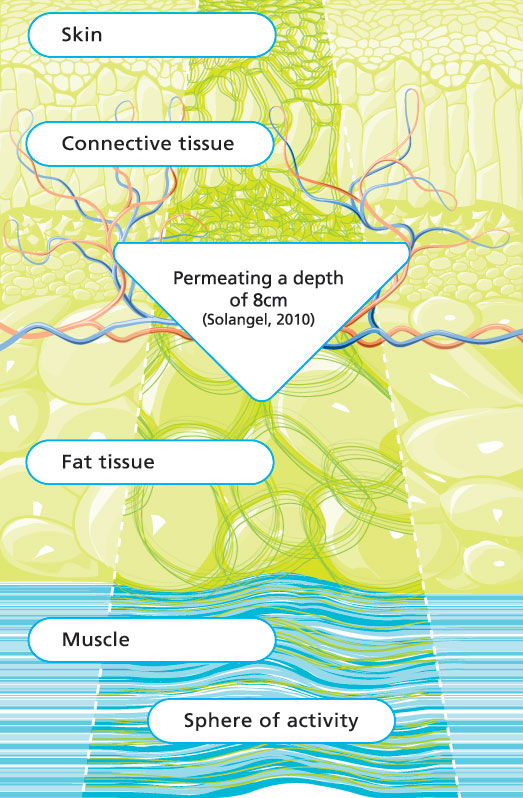 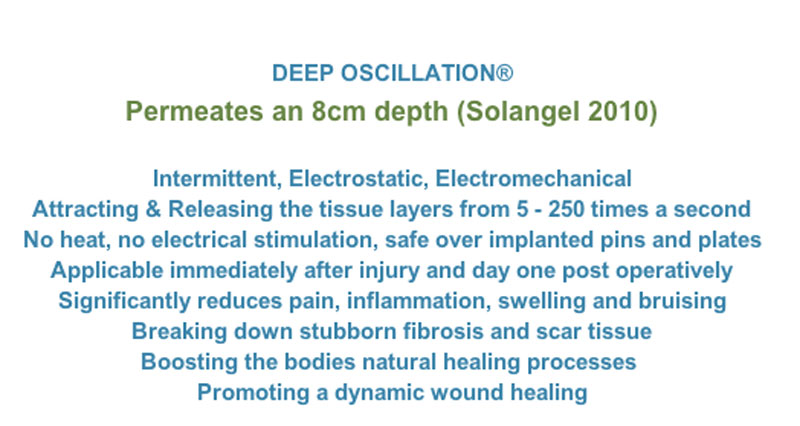 To watch the effect of DEEP OSCILLATION® deep in the tissues click here. To view study references, books, other publications and links to interviews click here

Find a therapist by specialisation...